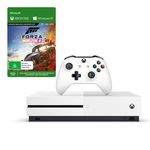 Join the next generation and enter the new world of play with the greatest games lineup, including Xbox 360 classics, on a 40% smaller console. But dont let the size fool you as there is an internal power supply and up to 1TB of internal storage, which makes the Xbox One S the most advanced Xbox to date!

With four times the resolution of the standard HD 4k Ultra HD, the Xbox One S console delivers the clearest, most realistic video possible. Not only that you also can stream 4k content on Netflix and Amazon Instant Video and watch Ultra HD Blu-ray movies in stunning visual precision with high dynamic range.

The Xbox one S console comes with the new Xbox wireless controller which features a sleek, streamlined design, textured grip, and bluetooth for gaming on Windows 10 devices. Best of all enjoy custom button mapping, improved wireless range, and plug in any compatible headset with the 3.5mm stereo headset jack.