Yes, seems like a small amount of effort, for no gain. But that's my choice.. holding people and businesses accountable is more important than $13… but to some of you that might seem completely foreign.

If you're going to post up invalid codes with no intention to honour them, then you should be pulled up on it. If you think that's unreasonable, you're probably part of the problem.

I was happy to buy at the price I bought it for regardless of the discount. In fact, I had planned to buy a second set for my daily driver and possibly my wife's car, but based on the sellers disregard for post purchase customer service and the fact that they STILL are advertising the expired code, I'll pass.

And yes, I would have purchased at the price I bought it for regardless of the coupon code..

So I bought a 2 pack Bluskysea B1W from eBay seller Bobstoresafeway who I believe is currently banned from OzBargain for shady practices. Within the subheading the seller was advertising the item with a 10% off coupon code which I promptly attempted to redeem.. this was in late May.

At this point I found a cheaper seller so made a purchase. A month later, my package didnt arrive and it turns out the other seller was dodgy so I go back to Bobstoresafeway and send them an ebay message that their code doesnt work.. again they ignore what I'm stating and respond about something else. So I make the purchase and ask them to issue a 10% refund to cover the difference from the non-functioning code.

About a day later, they respond and state that the code is expired and I received the item at a great price and that they could not possibly issue a refund of 10%. I argue that I've made them aware on three occasions and that they are clearly attempting to deceive customers and hope that they just give up on trying to receive a discount. They continue to refuse a 10% refund and state that I can just return the item for a full refund..

This goes on for about a week before I finally ask ebay to step in. Ebay seems unwilling to help and argues that I used an expired code and that is basically my fault. I argue for an hour on chat and provide them of all details of past correspondence and state I have screenshots of the code on the listing along with the failed code on checkout. They persist on telling me it's my issue before I finally provide the smoking gun… the code PURPLE expired in March and I purchased in late June… they finally admit the seller was in the wrong and state they will have their team investigate and ask the seller to refund me 10%. Great! Right? Wrong…

A few days later ebay state that they cant force the seller to provide a 10% refund and refuse to even offer a one time code etc to just resolve the matter… it's just the principle. Seller clearly deceives buyers, ebay enables bad practice and in reality, ebay wont do squat to penalize Bobstoresafeway.

Moral of the story, buy from Amazon… 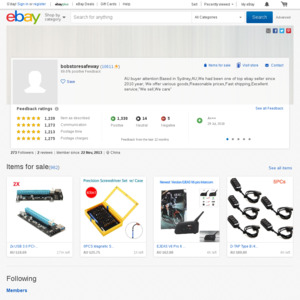