(Note that you need eBay Plus for the 99¢ code to work, but it doesn't guarantee free delivery.)

The blasters feature lights and sounds, indicators to track health and ammo, quick-reload button, and unlimited ammo. Amp up the play with the Nerf Laser Ops app! Power up for action with the AlphaPoint blaster!
The Nerf Laser Ops Pro AlphaPoint blaster fires a single-shot IR burst with each pull of the trigger and registers hits with lights and sounds. Players aim for the multidirectional receiver dome on the top of an opponents blaster to score a hit. Designed with unlimited ammo, the AlphaPoint blaster has a quick-reload button to replenish thei ammo supply to keep on battling. With the team indicator, players can select to face off in a team or in a free-for-all. Not compatible with Nerf Lazer Tag blasters.
Lights on the back of the AlphaPoint blaster displays the players the health status and ammo capacity, so they can keep track of when its time to reload, and how close they may be to being eliminated from the game. The blaster has an indoor-outdoor switch to adjust for different environments.
Battlers can amp up their play via the Nerf Laser Ops app by using the included armband to wear a smartphone device (not included) on their arm. In the app, they can access real-time battle intel that allows them to customize the blaster, track their performance, earn power-ups, and use GPS to locate opponents during battle! The AlphaPoint blaster comes with a solo attachment that holds the phone and attaches to the blaster, allowing for single-player battling with the app. 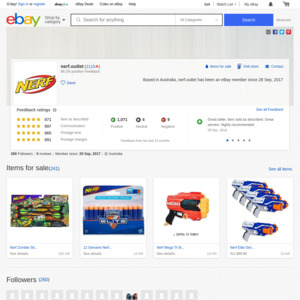