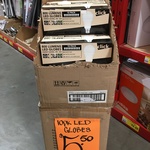 Bought some for $10 a few weeks ago and just saw that they are reduced further.

This is at Bunnings Belconnen. Pricing may be store specific