This was posted 1 year 6 months 18 days ago, and might be an out-dated deal. 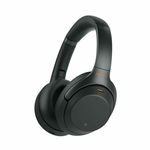 As mentioned by Dealbot the Sony WH-1000XMB's are on sale, alongside with the popular WF-1000XM3 TWS noise cancelling earbuds.

Please note that these are in refurbished condition (by manufacturer). The WF-1000XM3's are normally sold for $280~310-ish in brand new.