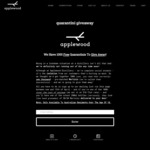 Go to Competition
Mark as SeenMark as Entered

Applewood has bottled up 1000 200-millimetre bottles of pre-batched martini made with its famed gin, and is giving them away to the first 1000 people who sign up to its mailing list over here, before Wednesday, April 15. If you're one of the first, all you need to do is cover the $10 flat-rate postage fee and it'll arrive at your doorstep.

The giveaway is only available to Australian residents over 18 years of age.

To win a Quarantini, you'll need to be one of the first 1000 people to sign up to the Applewood Distillery newsletter before April 15.