We have dumped the price of Tapestry down to $94.95 with free shipping after using the code 'STAYHOME'.

The cheapest alternative we can find the game for is $130+

Thanks so much everyone for your business and interest in one of the best games to come out in 2019.

I meet a good 2 x dozen of you on the road with personal deliveries the last three nights :) I hope we can do another big sale like this soon.

We still have 4 copies in stock if anyone was interested :)

We really appreciate your all questions and enthusiasm! I am personally reading every single comment in this thread, responding to every PM and Facebook message!

7 Wonders Duel - We are getting more copies in May and will be fulfilling any extra orders at this time.
https://gamesbandit.com.au/products/7-wonders-duel?_pos=1&_s...

Carcassonne Base Game - We are getting more copies in May and will be fulfilling any extra orders at this time.
https://gamesbandit.com.au/products/carcassonne?_pos=3&_sid=...

Secret Hitler - We have 8 copies on hand left :D
https://gamesbandit.com.au/products/secret-hitler?_pos=1&_si...

We just lowered the price of Underwater Cities to $99.95 [Only 2 left]
https://gamesbandit.com.au/collections/strategy-games/produc...

Please keep shooting your questions away, we will do our best to respond ASAP. 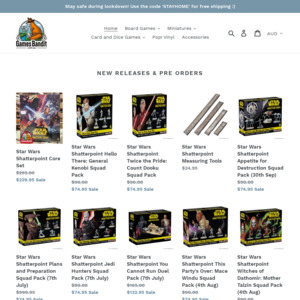