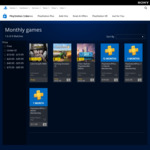 The remaining PS Plus games for June have been announced.

Meet your destiny as Luke Skywalker on Death Star II. Get boots on the ground in massive Clone Wars conflicts. Lead the First Order to dominance as Kylo Ren. Rebel against the Empire. Crush the Resistance.

Join the action and enjoy more than 25 free game updates since launch – including online Co-Op, massive offline battles against AI foes in Instant Action, and the non-linear, multiplayer tug-of-war between planetary surfaces and capital ships in Capital Supremacy. Be the hero in the ultimate Star Wars battle fantasy.

Note: This is the base edition of Star Wars Battlefront II