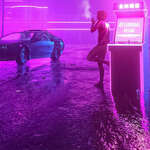 A new synthwave music bundle has started on Groupees this one featuring only albums with vocals unlike most synthwave which is instrumental. The bundle features releases from artists like Maxthor, Roxi Drive, New Arcades and Dana Jean Phoenix and 20% of your payment will be donated to DirectRelief Coronavirus Relief.

The first two bonuses have been unlocked once sales pass $3,000 you will also get: