This was posted 1 year 7 months 17 days ago, and might be an out-dated deal. 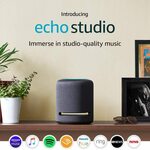 Echo Studio dropped down to $279. It has been this price before but it is the cheapest it has ever been, including during Black Friday last year when it didn't get any discount.

Echo 3rd gen has also dropped to $99. It was $79 recently but if you missed that, this is as good a price as it has otherwise been.

Both are listed as currently unavailable until 26 June. I ordered the Studio during the previous $279 deal while it was also OOS, and it has been unavailable since then. At least Amazon don't charge until it ships.

Sadly I believe Amazon Music Ultra HD is still not available in Aus, to take fuller advantage of the Studio.