This was posted 1 year 4 months 9 days ago, and might be an out-dated deal. 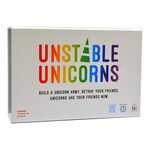 Thanks @acestrikerz its in stock @ Target.

Lowest price on this has been $17 but have not seen that for a while. At $20 this is a great buy and even though the box says its for 14+, I found that even my 8 year old found this game relatively easy to play.

Build a Unicorn Army. Betray your friends. Unicorns are your friends now. Unstable Unicorns is a strategic card game about everyones two favorite things: Destruction and Unicorns! From the back of the box: Learn how unstable your friendships really are. You start with a Baby Unicorn in your Stable. SO CUTE! But don't get too attached, because even Baby Unicorns aren't safe in this game! There are over 20 Magical Unicorns to collect, and each has a special power. Build your Unicorn Army as fast as you can, or be destroyed by one of your so-called friends! Seek revenge or protect your stable using your Magic! Sound easy? Not so fast. Someone could have a Neigh Card (Get it? Neigh?) and send the game into MADNESS! The first person to complete their Unicorn Army shall hereafter be known as The Righteous Ruler of All Things Magical. at least until the next game. Good luck. Contents: 135 cards and rule book.