This was posted 1 year 11 months 25 days ago, and might be an out-dated deal. 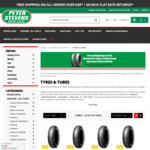 got an email from the shop, use code TYRE20 at the checkout to get 20% off tyres. Wish I'd seen this a month ago…free shipping on order over $20, and if you are close to one of their stores they do free fitting as per their blurb