This was posted 7 months 23 days ago, and might be an out-dated deal. 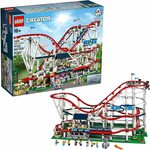 Back in stock, though not as cheap as its been in the past couple of weeks. Hurry, will sell out fast anyway.