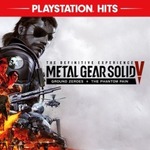 "You're a legend in the eyes of those who live on the battlefield. That's why you have to handle this mission yourself. How and where you make it, well that's up to you. Now go! Let the legend come back to life" - Ocelot