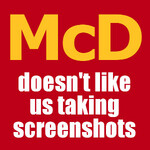 Repeat of this free Big Mac deal. I don't have direct link to the Facebook post as it's in the form of advertisement and saw it on my phone. Show the screenshot at a Maccas tomorrow for a free big Mac. Available from 10:30am to 2:30pm.

Offer valid from 10:30am to 2:30pm in Victoria on Monday 12th October. This offer is not to be distributed or redeemed by a child under 14 years. Limit of one redemption per person per day. Offer must be shown to crew person at order/pay point to be accepted, no photocopies are valid. Not to be used in conjunction with or to discount any other offer or with an Extra Value Meal® purchase. Only bona fide original vouchers will be accepted. Vouchers are void if tampered with in any way. McDonald’s® reserves the right in its absolute discretion to verify the validity of this voucher. Not redeemable via McDelivery®, mobile ordering or self-ordering kiosks in Restaurants.