This was posted 1 year 7 months 5 days ago, and might be an out-dated deal.

EDIT: Buy Smarte Increased the price to $3599, which is also the same as Powerland deal. Powerland seems to have free delivery btw! Still best to price match imo for warranty/returns peace of mind if you live interstate.

Best Price for a 75 inch Q80T QLED I have seen thus far… Essentially making it around the same cost as a Q70T (which is decent in its own right). But this is almost $1000 off RRP!
Q80T Rtings Review

Delivery to VIC was $89, but was able get to same deal with my local JB HiFi ($3588 delivered) as it is Local AU stock, brand new, and have a physical shop in AUS.
Proof
Hope you are able to get the same bargain.

PS: I reached out to several Harvey Normans and TGG but was unsuccessful in obtaining this price match (quoting it is cheaper than staff price and therefore can't match). Thankfully, JB was able to match! 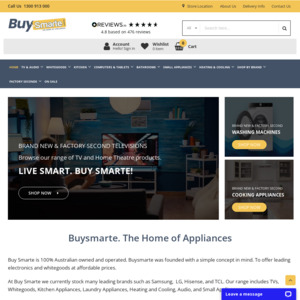