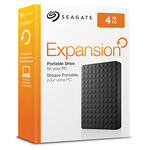 Found this while picking up some of my Prime Day deals from my PO Box. I think it's a decent buy at around $20/TB