$10 Bonus for Signing up to UP Bank 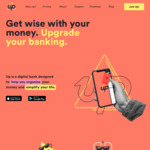 No conditions for the $10 bonus, just enter the code during sign up and it is already there when the account is opened.

$5 for both the referrer and referee. Conditions