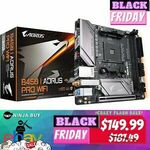 Really good price for a decent B450 ITX board with free express shipping. Cheapest I've seen so far for this specific model