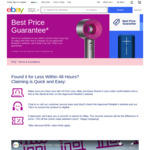 Coming into Black Friday, thought this was worth a re-share after 6 months to help with those extra savings. Credit to previous posters for the formatting. Please stay safe, and enjoy :)

We’re so confident in our seller’s prices that if you buy on eBay and then find it cheaper on an approved retailer's website, we’ll beat it by 5%. That’s our guarantee. Available on all new, fixed price items.

Found it for less within 48 hours? Claiming is quick and easy:

Which online retail websites does the eBay Best Price Guarantee apply to?

What does Best Price Guarantee cover?

Are shipping costs included in the eBay Best Price Guarantee?

How does eBay reimburse me if I find an identical item for less on an approved online retail website?

Does the guarantee apply to the listing price or the price I actually paid for the Eligible Product?

Who does this offer apply to?

What happens if an item is returned?

Is there a maximum voucher amount that I can claim?