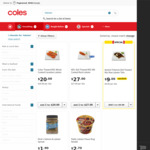 Similar to the deal at Woolworths!

“Christmas just got a whole lot more decadent for Coles shoppers, with the supermarket giant announcing today they'll be slashing the price of lobsters in half ahead of Christmas.

The cost of the luxury item will plummet to the all-time low price of $20, with the retailer buying up a huge supply of MSC certified Western Rock Lobsters that were destined for the export market.

The bargain-priced crustaceans will go on sale from this weekend, available at Coles Delis nationwide, and there'll be plenty to go around, with the supermarket chain securing 29 times the amount of lobster compared to last year.”