This was posted 10 months 11 days ago, and might be an out-dated deal. 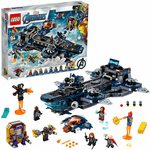 Features the S.H.I.E.L.D. Helicarrier, hi-tech flying aircraft toy carrier with a cockpit for 3 mini-figures, and a small fighter toy jet

M.O.D.O.K. – the big-brained supervillain – is on the attack, and Avengers are ready for action to return the bad guy to his prison cell

Marvel Avengers fans can recreate thrilling scenes and dream up their own stories with this playset - an awesome gift for kids aged 9 and up!

Probably not many love received from this model but this is by far I've seen the lowest.