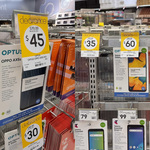 Spotted this at my local Kmart (Stud Park) and thought they were amazing prices for what you get.

That being said, if I had to pick between the two, I would recommend paying the extra $15 for the A30 is a much better phone, where even though it has less storage, it has a higher resolution screen and is AMOLED, so it looks just as stunning as the flagship phones (just with lower performance). The A30 also runs Android 10, compared to the AX5s' Android 8.1 with Color OS (security updates from December 2020).

Oppo AX5s
by Oppo
Samsung Galaxy A30
by Samsung