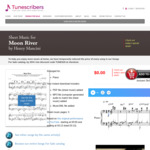 Free sheet music for the month of March from Tunescribers, transcribed from this YouTube video - https://www.youtube.com/watch?v=bJKR6GA2_h4