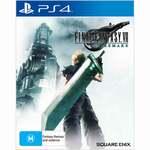 Cheapest price for the game currently, matching the one Big W had during Christmas. If you have a ps5 and plan to play the new dlc, i believe buying this and the dlc seperately comes out cheaper. Even factoring in trade in values after you've finished playing, the former option comes out cheaper. Unless I've done my research wrong and someone can correct me on that.

EDIT: Currently $10 @ Big W (thanks @luchocarias), but it seems to be out of stock and price matching requires the item being 'in stock'. So unless you can find it locally, you're out of luck.