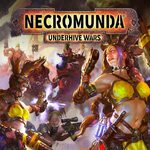 Great prices for these two games - all time lowest prices on the PlayStation Store.

Deep below the nightmarish, polluted hive cities of Necromunda, in the twisted, vertiginous, dark tunnels of the Underhive, rival gangs fight to the bitter end for personal power, wealth, survival and the honour of their Houses. Only the strongest survive.

Lead, customize, and grow your gangs of Escher, Goliath, and Orlock. Specialize each member and send them to battle in hazardous dystopian environments. Exploit the terrain in tactical gunfights: climb raised walkways to take advantage, set traps, and ambush foes to force them into bloody melee engagements.

GRAVEL: A DANGEROUSLY FUN GAME
With arcade-style gameplay that delivers a thrilling rush experience: destroy obstacles, take shortcuts and forget any rules till the end to win!

THE ULTIMATE OFF-ROAD EXPERIENCE!
Race around the world in a variety of environments in 4 different disciplines:
- Cross Country: the fastest checkpoint races in the hot Namibia desert, or through the Alaskan mountains
- Wild Rush: lap races in unique environments, such as a Polynesian atoll or an Australian iron mine.
- Stadium Circuits: real and fictional arenas with spectacular layouts.
- Speed Cross: from Las Vegas to Montalegre, nine real tracks with mixed tarmac and gravel terrain

YOUR CAREER BEGINS THIS YEAR ON GRAVEL CHANNEL
Meet the five Off-Road Masters winners of the previous year's edition of the show. Compete against them in a real show, gain fame and fans in more than 60 events from the most extreme places on Earth or against other players online, for the title of Gravel World Champion!