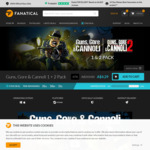 Great price for this double pack of Guns, Gore & Cannoli - according to ITAD the cheapest price to get both games.

GUNS, GORE & CANNOLI
Lose yourself in an exciting, elaborate tale of the underground and underworld. Experience friendship, betrayal, vengeance, and witness first hand the rise and fall of a criminal mastermind.

The game tells the story of Vinnie Cannoli and his mob family, set in the fictional Thugtown circa 1925, the height of prohibition. Beneath the city overrun by zombies, there's a dark story of conspiracy and betrayal.

Unravel the sneaky mafia ways and government conspiracy while you try to look for your lost pal and for answers about the zombie outbreak.

Fight, shoot, blast and kick your way through a deeply engrossing story. Not only will you have to take on the undead, but also rivaling gangsters and the army trying to cover things up.

GUNS, GORE AND CANNOLI 2
Welcome to the 1940s. Europe is being torn apart by the war, the USA is preparing for battle and the mob does business as usual. Only this time they went too far, even for Vinnie’s standards.

Prepare yourself to go to war after you make a shocking discovery about what actually happened during the end-stage of the Thugtown Massacre from Guns, Gore & Cannoli 1.

1944, the war in Europe is entering its final stage. 15 years have passed since Vinnie survived the Thugtown Massacre. But now, some loose ends start crawling out of the past, dragging Vinnie as far as the European battlefield of World War 2. Find out who is chasing Vinnie around like a dog, turning all his friends into foes.

You don’t want to die alone in the trenches? Well round up a platoon of four players and get blasting. Play as Vinnie in the solo campaign, or with up to three friends together while fighting through hordes of Nazis, zombies, monsters, gangsters, cops, soldiers, tanks, submarines… in this all-new and incredibly fun arcade-style co-op action game.

Teamwork is essential to surviving waves of enemy goons.