This was posted 5 months 1 day ago, and might be an out-dated deal. 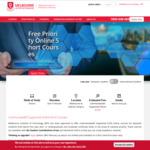 You may remember last year there were a few great deals on discounted higher education courses (commonly referred to as covid short courses). Whilst the deals have continued this year, they are nowhere near as good as the prices were last year (seems to be only about 50% off now, rather than the solid 80% or so off), anecdotally speaking.

One institution is offering graduate certificates, so post-graduate level qualifications, for free, first in first served! There is a July intake for the half-year course. Undergrad certs as well. Chance to broaden your career prospects in IT and cybersecurity. Online study for domestic students.

I am in no way affiliated, I've just been stalking the covid short courses for a while. This is a great chance for self-taught people to get some paper qualifications. It is TEQSA regulated. Some people may prefer quals from institutions with higher rankings or greater public profiles. And some people simply cannot afford the thousands of dollars to do this. So if this benefits some people who would otherwise not have been able to engage in study, that's good news.