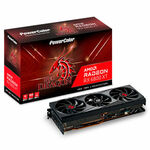 Saw it a couple days ago and no one posts it.

The performance is comparable with RTX 3080 without ray tracing and DLSS.