This was posted 5 months 9 days ago, and might be an out-dated deal. 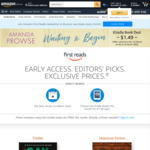 Get early access to editor's picks and choose two Kindle eBooks for FREE this month (price remains $1.99 for non-Prime customers). This month's picks: