It's a gorgeous Presage and the SRPC83J has an exhibition back if you want to see the movement in action. It's not a daily driver but a beautiful white face for the right occasion.

Speaking of the movement though and daily driving, accuracy is rated as +45/-35 seconds a day. I've got a few Seiko's that have the 4R35 movement, one I'd say drops 60 seconds a day, another holds almost perfect, and a third is great except for when it also wants to drop a few minutes each week. That's why I put a 4R35 movement watch in the seldom daily-drive category because you're going to want to resync the time on these guys at least every second day to keep on the money. They also say it carries a 41 hour reserve which I think is a bit of hogwash, I'd say if you get 30-36 hours then you're doing well - but YMMV!

But that's getting off track. These are beautiful watches which hold their own and frankly punch above their price bracket, dollar for dollar. It's also one of the few Seiko's I think looks perfect on the factory band. The black leather is a great accent, but also it will carry well on a stainless steel band if you wanted to switch it out. I've never seen one on a nato band, but you do you.

Note this is a Starbuy daily deal, so never know how much stock they carry. 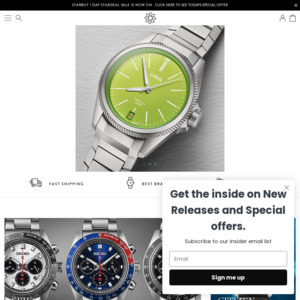