This was posted 8 years 3 months 17 days ago, and might be an out-dated deal. 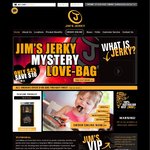 Jim's Jerky February Deal - FREE 500g Original/Garlic Biltong Chunks with every online order of $70 or more. The number one complaint that we receive from our Oz bargains customers is the cost of freight. So we've taken care of it for you guys. FREE FREIGHT!!!!!!!