I spent the past year creating Price Hipster, a product search engine and price watching website for the OzBargain community!

Update 13/11/15: Thanks everyone for the support and feedback! I realise there are heaps of comments here and no one wants to read through them all. If you have a suggestion, it has probably already been raised. I'm currently working on a big update and I'll be sure to let you all know when I release it. I'll be keen to get further feedback and suggestions then. :-)

I've spent the past year creating a powerful tool for you all.

These are the reasons I created Price Hipster:

I really appreciate those OzBargainers who have taken the time to use internet archives to dig up previous prices, but it's less than ideal, and hopefully will now be a thing of the past!

Price Hipster currently includes 5 websites in its index. That will expand in the near future.

Questions for you all:

If you find any issues with the website or have any suggestions, I'd love to hear them! 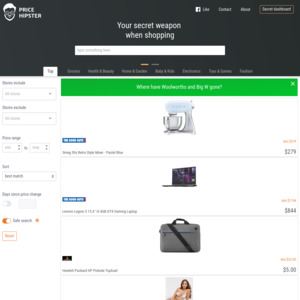