This was posted 4 years 10 months 12 days ago, and might be an out-dated deal. 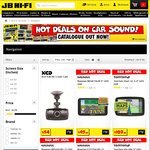 Been looking for a GPS since a while. Looks like JB-Hi-Fi has some RED HOT DEALS.

There are many other deals available. Check the main link. Pick up in store to save on delivery charges.