This was posted 5 years 2 months 27 days ago, and might be an out-dated deal. 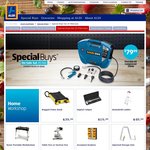 On the 25th February Aldi is selling a number of musical items at good prices. Great for the aspiring musician, or a cheap option for parents with kids who are musically interested.

If you're craving a bit of horn, a B flat brass trumpet going for $149 -> your average yamaha goes for about $600+ and Bach trumpets a few thousand so this is a steal if you need to wake up your neighbours at 5am and want to save electricity by not using your sound system.

(A visually comparable trumpet goes for $369 at HN http://www.harveynorman.com.au/nuova-trumpet-with-case.html?...)

And if ear piercing clarinet squeaks are more your thing, for $149 you can grab a beautiful ebony grain clarinet.

And for trying to pick up chicks in highschool, a 40" acoustic guitar with steel strings for $69.99 (Cheaper than some colognes!)

All instruments (except guitars it seems) come with carry case, musical talent not included.

Being an Aldi deal, stocks may be limited so be in fast, or your mood will B flat.