Are SPER Unethical Debt Collecting for a Private Business?

Interested to hear people's opinions or personal experiences dealing with SPER. I think it is very unethical that they are debt collecting on behalf of a private company (Toll) and have the power to take away people's licenses and garnish their accounts for non-government fines. Missing a $2 Toll can balloon to thousands of dollars through Toll's excessive administration fees and then the government's infringement fine on top of that.

My story - I have a good friend that owes >$45k in SPER fines. SPER will not cut a deal and he can only get his license back when he has repaid it in full. The majority of these fines are for toll evasion but this only accounts to <$100 in toll fees. The rest is administration fees and government infringement fines on top of the tolls. He needs his license for work so is still driving but will almost never be able to pay the fine in full. Will probably end up in jail.

What prompted this is an article in the Brisbane Times today: http://www.brisbanetimes.com.au/queensland/sper-bill-prompts... 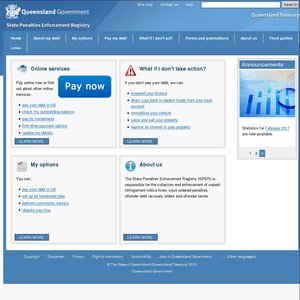