This was posted 5 years 2 months 30 days ago, and might be an out-dated deal. 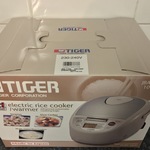 I've been looking for a new Tiger brand rice cooker (well known to be the best brand going) for a while, but they seem to be expensive and hard to find at a bricks and mortar shop. My girlfriend picked up this rice cooker from Costco today, and not only is it at least $50 cheaper than any I could find on eBay, Costco has a great warranty in the unlikely case that anything goes wrong with it.

Made in Japan. Around 20 of these were in stock at the Canberra Costco today. Available in fashionable Urban Beige. Deal will probably end when Costco is sold out. Not sure if available in all Costcos.

Get your fluffy, toothy, delicious rice on, OzBargainers.