This was posted 3 years 5 months 4 days ago, and might be an out-dated deal. 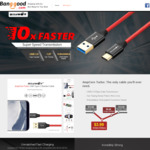 What is the difference between already good Ampcore and the more premium Ampcore Turbo? It's not really clear. For USB C cables it appears the main difference is Ampcore is USB 2.0 where as Ampcore Turbo is USB 3.0/3.1 Apart from that I can't say but if you've been waiting for a bargain on these cables this is the one!

Note: Processing and shipping of orders maybe delayed a few days due to golden week holidays in China