This was posted 4 years 1 month 11 days ago, and might be an out-dated deal. 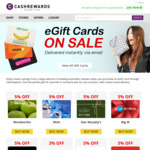 Hi everyone. We've just launched our brand new eGift card portal with 29 discounted cards ranging in savings of up to 5% off. While it may not seem much, in my opinion any saving is a good saving. Please note that apart from WISH cards, these will not stack with cashback if/when used for redemption via Cashrewards (also no stacking with refer-a-friend). Delivery is conveniently via email, and from tests we've conducted, most are being delivered within a few minutes (WISH remains unchanged). We welcome any feedback on this new site. Please check back regularly as we'll be adding a heap more in the new year. Thanks for the continued support :)

And here are some other useful links: