This was posted 2 years 22 days ago, and might be an out-dated deal.

1/2 Price All Olay Skincare at Woolworths 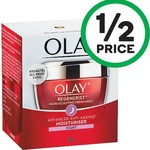 As advertised in the Woolies catalogue on page 33, all Olay skin care will be half price from Wed 31 Jan - Tues 6 Feb.

During the summer months I like the Complete Defence Daily UV Lotion Sensitive Sp30+ 75ml which is really light, absorbs quickly, has no scent and a higher SPF - it will be $7.70 at half price. Those who want to improve texture and fine lines may prefer the total effects range.