This was posted 4 years 4 months 9 days ago, and might be an out-dated deal. 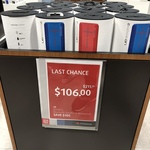 Walking through Duty-Free and noticed these for quite a bit off, spoke to the guy and he said it was due to new packaging on the UE Boom 2s. Still the same model but heavily discounted due to the old packaging.

Not sure if it’s the same at all JB Hi-Fis.