This was posted 3 years 21 days ago, and might be an out-dated deal. 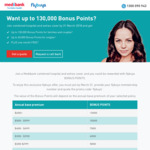 if you are holding (or looking to join) Top/Mid Hospital & Extra cover, you might want to shop around to take full advantage of the promotions from Bupa and Medibank