This was posted 3 years ago, and might be an out-dated deal. 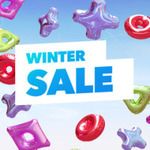 Playstation Store AU is having a Winter Sale that ends on 23/8/2018. A lot of games are on sale and are worth checking out. I'll post some good deals below:

These are the best deals on good games I could find. There are a lot more at https://store.playstation.com/en-au/grid/STORE-MSF75508-SUMS...