This was posted 3 years 3 months 17 days ago, and might be an out-dated deal. 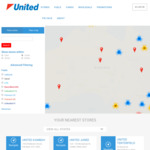 Not sure how long this has been available but I just stumbled across it recently.
It is not advertised in store however I have now used Coles 4c/L discount voucher at several United Petroleum service stations in S.E. Melbourne (Rowville, Stud Park and Scoresby).
On each occasion the attendant scans the voucher on their systems and 4c/L discount is applied.
I am led to believe that they will also accept Woolworths voucher too but have not confirmed.
(NB: These United servos near me do advertise a discount for Ritchies IGA voucher in store).

On my most recent fill-up of E10 the attendant made a point of telling me that they will only process the discount if the voucher scans.
They cannot manually put it into the system apparently.