This was posted 3 years 26 days ago, and might be an out-dated deal. 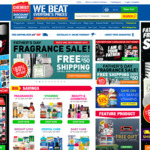 Similar deal to ShopBack but this is 10 off 100, worse but I guess if you have a big pending order.

Notice - merchant has advised us this offer will expire on Sunday