This was posted 3 years 5 months 14 days ago, and might be an out-dated deal. 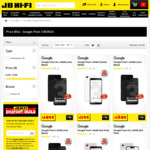 Appears a repeat of Black Friday's & previous deal for one day only.