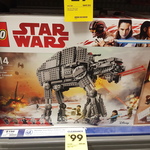 Seen in Parkes NSW bigw.. No idea if on clearance in other stores.

Lots of copies on shelf