This was posted 1 year 11 days ago, and might be an out-dated deal. 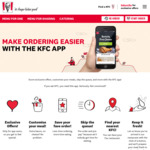 Got an email saying that for this week Original Tender Go Buckets for $2.