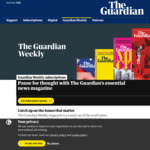 Good for holiday reading.
AU$6 for the first 6 issues (then AU$97.50 every quarter)
I got my first issue today, it arrived via the post, it takes about 2 weeks to process from my experience.
It has been posted on Ozbargain before, but those offers have expired.
Hard copy, not the online edition.