[eBook, Audiobook] Free - The Life You Can Save by Peter Singer

Updated in 2019 and released for free as both an eBook (mobi, epub or pdf) and an Audiobook (read by a bunch of celebrities). Description from the website:

A Compelling Book That Inspires and Empowers People to Act Now to Address Global Poverty
In 2009, Peter Singer wrote the first edition of The Life You Can Save to demonstrate why we should care about and help those living in global extreme poverty, and how easy it is to improve and even save lives by giving effectively. Peter then founded a nonprofit organization of the same name, The Life You Can Save, to advance the ideas in the book. Together, the book and organization have helped raise millions of dollars for effective charities, supporting work protecting people from diseases, restoring sight, avoiding unwanted pregnancies, ensuring that children get the nutrients they need, and providing opportunities to not only survive but thrive.

In the decade since the first book’s publication, dramatic progress has been made in reducing global extreme poverty. However, millions still live on less than $1.90 a day, and there is yet much to be done.

To address the continuing need, and to build on the success of the first edition, Singer acquired the book rights and updated the content to be current and even more relevant. With mission-aligned celebrity narrators and by giving away the audiobook and e-book for free (in addition to having it available for purchase through traditional e-commerce and retailers), the 10th-anniversary edition of The Life You Can Save aims to inform, inspire and empower as many people as possible to act now and save lives.

Personally, it's no understatement to say that this book changed my life. Its central thesis is deliberately provocative:

Singer spends a lot of the book defending (often valid) arguments against this conclusion, and comes to the practical recommendation that we take the pledge to donate a small percentage of our income to effective charities. Suggested percentages are realistic, starting at:

No matter your thoughts on effective altruism, the book is a fascinating read that I'd highly recommend giving a go. And it's free! 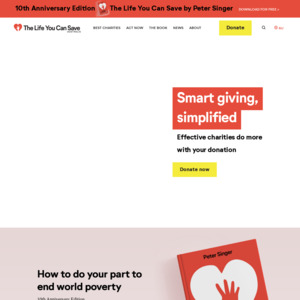